A woman in the US is able to speak for the first time in 11 years after a pioneering voicebox transplant.

Brenda Jensen said the operation, which took place in California, was a miracle which had restored her life.

Thirteen days after the surgery she said her first words: “Good morning, I want to go home.”

Ms Jensen, 52, had been unable to speak on her own since her voicebox was damaged during surgery in 1999.

The tube used to keep her airways open injured her throat and scar tissue stopped her breathing.

Since then, she has been unable to taste or smell food, could breathe only through a hole in her windpipe and could talk only with the help of an electronic voice box.

In October, surgeons at the University of California Davis Medical Centre removed the larynx (voicebox), thyroid gland and 6cm of the trachea (windpipe) from a donor body.

In an 18-hour operation this was transplanted into Ms Jensen’s throat and the team connected it to her blood supply and nerves. 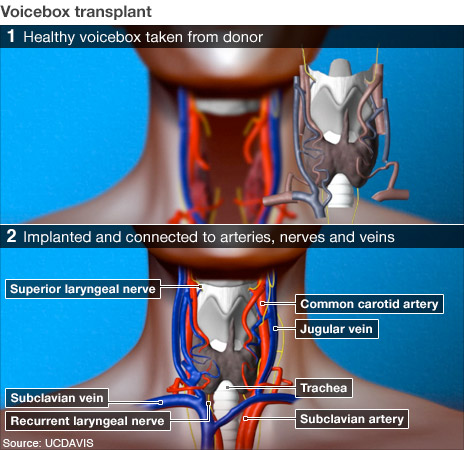 Thirteen days later she was able to speak her first croaky words and is now able to talk easily for long periods of time.

Ms Jensen said: “This operation has restored my life. I feel so blessed to have been given this opportunity.

She is also learning how to swallow again.

“Every day is a new beginning for me. I’m working so hard to use my vocal cords and train my muscles to swallow.

“I’ll probably never sing in a choir or anything, but it’s exciting to talk normally and I cant wait to eat and drink and swim again.”

Professor Martin Birchall, from University College London, who was part of the surgery team, said: “The larynx is one of the most sophisticated neuromuscular organs in the body.”

“We’ve learned that we can repair nerves to make even very complex organs function again. It’ll open the door to better facial transplants and will be extremely important as tissue engineering develops.”

A voicebox transplant might be life changing, but it is not lifesaving.

The procedure is rare, the only other documented case took place at the Cleveland Clinic in 1998.

Everyone who receives a transplant must take drugs to suppress the immune system for the rest of their lives.

These drugs can reduce life expectancy so are normally reserved for life saving procedures.

One of the reasons Ms Jensen was suitable for this transplant was because she was already taking immunosuppresing drugs after a kidney-pancreas transplant four years ago.

Professor Peter Belafsky, part of the surgical team, said: “Brenda was an exceptional candidate for the transplant because she was highly motivated.

“Anyone who’s met Brenda knows that she is a strong and determined individual with a terrific outlook on life despite the many physical challenges she’s faced over her lifetime.”