Six men locked away in steel tubes for a year-and-a-half to simulate a mission to Mars are set to end the experiment.

The Mars500 project, undertaken at a Moscow institute, was intended to find out how the human mind and body would cope on a long-duration spaceflight.

It is a venture that has fascinated all who have followed it around the globe.

The study even saw three of the men carry out a pretend landing on Mars, donning real spacesuits and walking across an enclosed sandy yard.

Everything changes for the men when they “land” back on Earth at 14:00 Moscow time (10:00 GMT). That is when the hatch to their sealed home at the Institute of Biomedical Problems (IMBP) is opened for the first time since 3 June, 2010.

It is expected the crew will have a few brief moments to wave to cameras and perhaps make a quick statement before being whisked into quarantine for three days of medical checks.

For much of the Mars500 project, the six have had only limited contact with the outside world. Their “spaceship” has no windows, and the protocols demanded their communications endure a similar time lag to that encountered by real messages as they travel the vast distance between Earth and Mars.

At its maximum, the round travel time for a question to be sent and for an answer to be received was about 25 minutes.

This meant having to resort to text media, such as email and Twitter, and video blogs.

Asked recently what he was most looking forward to when he got out, Italian-Colombian Diego Urbina told BBC News via Twitter: “Meeting my family, calling my friends, bumping into strangers, going to the beach.” 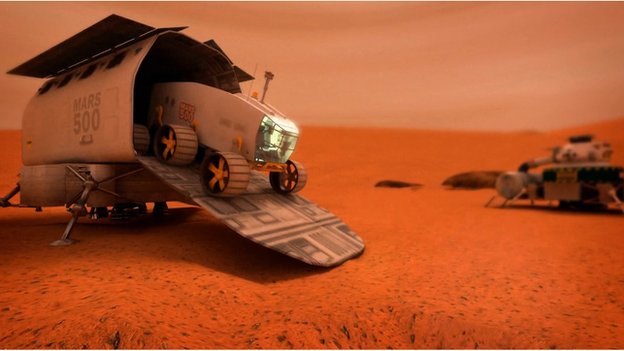 THE LAYOUT OF THE MARS500 ‘SPACESHIP’

There were many aspects of a real mission that could not be simulated in a Moscow suburb, of course – such as weightlessness and the dangers associated with space radiation.

But scientists have expressed great satisfaction with the data that has been acquired, and are looking forward to applying the lessons learned to ever more realistic scenarios.

During the 17-plus-months of their virtual voyage, the crew took part in various studies to assess the effect their isolation was having on their psychological and physiological well being. Their stress and hormone levels were monitored, as were their sleep patterns, and their moods. The men also carried out an assessment of the benefits of dietary supplements in such situations.

“I can only praise the crew for their courage and their great spirit,” said Dr Martin Zell from the European Space Agency, which was a major sponsor on the project.

“They were a brilliant team – they really will finish as a crew and not six individuals,” he told BBC News.

Tentative discussions have now begun between the partners on the International Space Station (ISS) about the possibility of doing some sort of isolation experiment in orbit.

Initially, this might simply involve introducing a delay in communications to controllers in Moscow and Houston, US. Ultimately, it could also involve removing crew members into separate modules to give them a taste of what the Mars500 participants have gone through.

Certainly, the partners want the ISS to become more of an “exploration testbed” in the decade ahead – a platform to try out the new approaches and new technologies that will help humans move deeper into the Solar System.